Want to up your PPC game and kill the competition?

There is a ton of information to be found online about how awesome Single Keyword Ad Groups are, how to set up this mystical Google Ads hack, and why you should do it.

So, in 2019, why another article about Single Keyword Ad Groups (SKAGs)?

SKAGs are still a much-debated topic by Google Ads managers. Using this technique is supposed to skyrocket your campaign performance and outbid your competition.

Many Professionals recommend between 15 – 20 keywords per Ad Group.

Let’s talk about what a SKAG is and how this is setup.

The concept is to add one and only one keyword (exact match) into an Ad Group. In theory, this will give the best performance for that Ad because it’s hyper-targeted with one specific keyword. Some of the arguments are:

So, you’ll outperform your competitors with very targeted Ad Groups and Keywords. 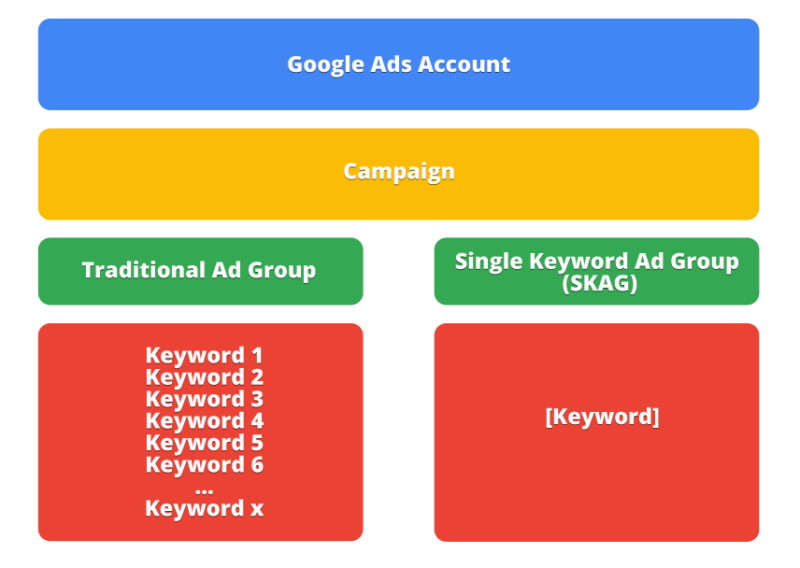 I used to do this (way) back in 2016, and it worked like a charm. I’d pull the best performing keywords out of the Ad Group and create a brand new Ad Group (even name it SKAG) just for that one exact match keyword. What I noticed is the Quality Score increase and these were the highest performing and most profitable campaigns.

I noticed starting in 2018 the performance started dropping. The Cost per Acquisition (CPA) started going up, and Click per Click (CPC) gradually started increasing.

Sort of. Yes, Single Keyword Ad Groups (SKAGs) are Dead and now we’re competing again ourselves for close variants in other groups.

Then in July 2019, Google announced they would extend close variants to board and phrase match.

So, the benefit of SKAGs is still there, it just matches for close variants. Which will actually work better in most circumstances, because you don’t have to have massive lists of keywords. Google will automatically broaden the match for close variants.

Just make sure to keep an eye on the matches, and remove keywords you don’t with negative keywords.

Some of the close variants include:

Close variants are a great way to capture a wider range of keywords without having to enter every single variant manually.

This reduced the number of required keywords, but still displays the Ad to visitors what close content search and intent.

So, the real benefit of SKAGs is gone, but really SKAGs are actually a management headache because they make a mess of your account, creating tons of Ad Groups, it’s just a lot to manage and now the SKAGs are competing against the rest of the keywords in other campaigns.

Just run your campaigns and Ad Groups as you would normally, without SKAGs. Your campaigns will be clean and easier to manage. Since Google is now using Close Variance, you actually need fewer keywords, Ad, duplicates and less management.

Although I enjoyed the performance of Single Keyword Ad Groups, I hated working on accounts with lots of SKAGs. It was a nightmare to keep track of everything, and move the keywords around and create a lot of Ad Groups.

Without Single Keyword Ad Groups is how Ad Groups should have worked in the first place. My accounts are cleaner and easier to manage.

If you are thinking of trying SKAGs, it’s fine if you have a small account, a few Ad Groups and a small number of keywords. It’ll actually work just like a Traditional Ad Group anyway.

But, if you have a large complex account, with a lot of Ad Groups, Ads and Keywords, don’t bother. There is now no benefit, it will create a lot of work for you and you’ll actually be competing against your own keywords.

How much money are you wasting?

Are you spending too much on leads?

Know what your leads cost to be profitable

Are you spending too much on leads?

Know what your leads cost to be profitable